5 Most Iconic Band T-Shirts of All Time 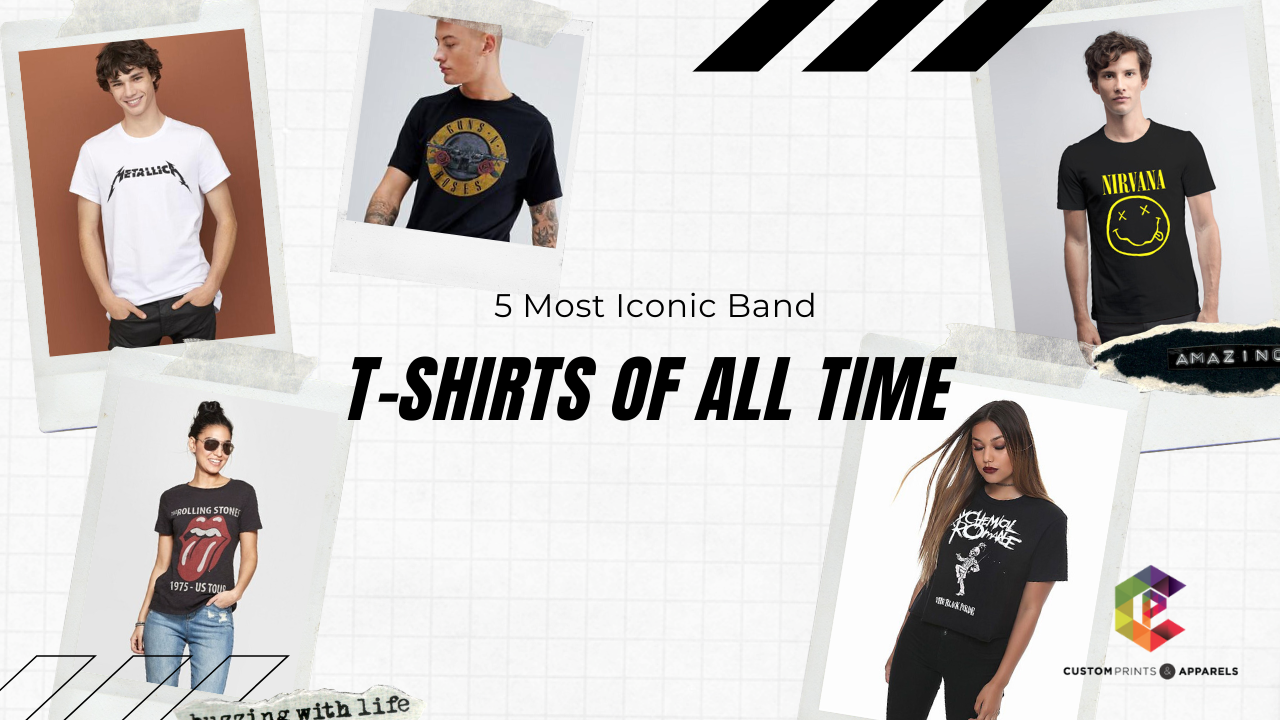 T-shirts have always been the versatile and essential garment every wardrobe has, but when it’s of your favourite band, it automatically becomes your most valuable treasure. Brand tees are one of the best merchandises a fan can have in support of their band. They are practical (they’re t-shirts after all) and can be used for a long, long time. In case the t-shirts are exclusive and only printed once, at least you’ve got this awesome piece of proof to show you were a fan!

As the title of this post says, we have made a bit of research and comparison ourselves, so we know what you’re here for. Without further ado, let’s into the top 5 most iconic band tees of all time. If you come here to get some inspirations for your custom t-shirts, you might just find them here too!

This classic G N’ R t-shirt design is the epitome of timeless and vintage. You almost couldn’t walk into a vintage-themed thrift shop without finding one of these gems. This tee gives you the ultimate vintage feel and vibe people look for. It is simply that – a timeless graphic. Of course, we can’t talk about the graphic without mentioning how there are literally guns and roses on it – smart move with an amazing design.

The colours on the graphic match perfectly with various colour palettes and themes. Just look at the main colours on the design. For example, there are some dark green leaves, red roses, and a circle frame in muted yellow. Each of these colours can be brought out individually, making any pairing with another garment to match one of these colours look cohesive effortlessly.

Whether you’re a fan or not, you have DEFINITELY seen their symbol before. Talk about brand recognition done right! Designed in the 70s, the tongue and lips a.k.a ‘Licks’ logo was created to showcase a statement of being anti-authority. It’s safe to say that this ‘Tongue and Lips’ symbol smooched its way to our list without much dispute because we all know this will keep being iconic even for generations from now. To cite some experts, this shirt is said to be “one of the most visually dynamic and innovative logos ever created”, and rightfully so.

Similar to the previous one, you may not particularly be into Nirvana or their music (but seriously, who doesn’t?), but we can bet our fingers that you have seen the t-shirt (or the logo) at least once! At one point, you couldn’t walk down the shops by the street without seeing one of these t-shirts hung up on the wall or on the mannequin. To describe the graphic briefly, the logo is a wobbly smiley face with X-ed eyes. Ring any bell? Sure it does! Just like how you’ll keep going back to give their songs a listen from time to time, that is how you’ll never stop seeing the ‘broken smiley’ graphic, be it 10 years ago or 10 years from now.

But what was the significance of the smiley face? It was meant to be a statement from Nirvana (and similar grunge bands) against the senseless, highly-manufactured pop music. The wobbly smiley is designed by Nirvana’s vocalist and lead guitarist himself, Kurt Cobain, which is a name that needs no introduction in the industry until today. Even in this era, the logo continues to leave an impression and became known as the image of the band’s impactful career.

One thing you can note about this t-shirt is that it took something that is widely common and known (i.e. a smiley face) and modified it to fit the look and message they were going for. Because of that, it sticks in our minds almost instantly and can recognise it the next time we see it. If this should give you any idea or it sounds like something you want to achieve, you can certainly consider this method.

“Wait, isn’t it just the one with ‘Metallica’ written across the chest?” You’re right, that’s the one! So, how did it make the list? Because that one line of ‘Metallica’ works. In a loud world of merchandises, this t-shirt’s simplicity is what makes it stand out from the rest. If there is a spectrum of loudness, Metallica’s music and their band tee would be on the opposite ends respectively — but that’s the charm, isn’t it? For a band that debuted close to 40 years ago, like its members, its logo has strong staying power.

Between the band’s energy on stage and the fanatical craze they are used to, one might not expect their shirt to appear so simple. However, as we can learn from this tee from time to time, sometimes, simplicity works better. This Metallica symbol proves exactly that by still getting recognition for their logo that clearly stands the test of time.

MY CHEMICAL ROMANCE “The Black Parade”

My Chemical Romance fans rise up, this one’s for you! As soon as you hit the G note on the piano, all hell breaks loose. That song may have notched a spot on our list of most iconic songs of all time, but their t-shirt is also climbing up a rather similar chart! The graphic of their The Black Parade tee comprises a line of the album title itself and an illustration of a marching skeleton, supposedly the dying-and-later-dead protagonist the iconic song is centred around. Specially made for their The Black Parade album, the t-shirt is not only visually appealing, but it carries a story that everyone can easily connect to both the band and the tee. As soon as you see the illustration, you will immediately know it is for that song or album of theirs.

For your t-shirt to be as impactful as this tee is, you should start with a significant story as well. Of course, it’s better to work from a story that already exists. Make sure it is known enough for people to know from just a glance what is it from. It doesn’t have to be an actual movie or show scene pasted on the front of the tee, but the effect should be similar. People will know where your graphic is from just from looking at it, without needing further explanation.

No doubt, there are thousands of other iconic band tees, but listing them all means the list will never end. After all, a band’s merch will always be iconic to fans of that particular band. Above are just a small piece of the examples and they are considered good for various different reasons, which is what makes each of them unique. Did you find your favourite band’s tee up there? We sure hope so! If it’s not on this list, don’t worry, we know their tee is iconic too! If you come here to get inspired in your designing stage, we hope we’ve helped you in that too!

Have your own design that you’d like to get printed on your own t-shirts? We can help! You will get free mock-ups of your printed tees as well as free professional printing consultation. We are just one call away, so just reach us as we provide the printed t shirt Singapore printing service you have always looked for!