How NOT to Design Your Hoodies 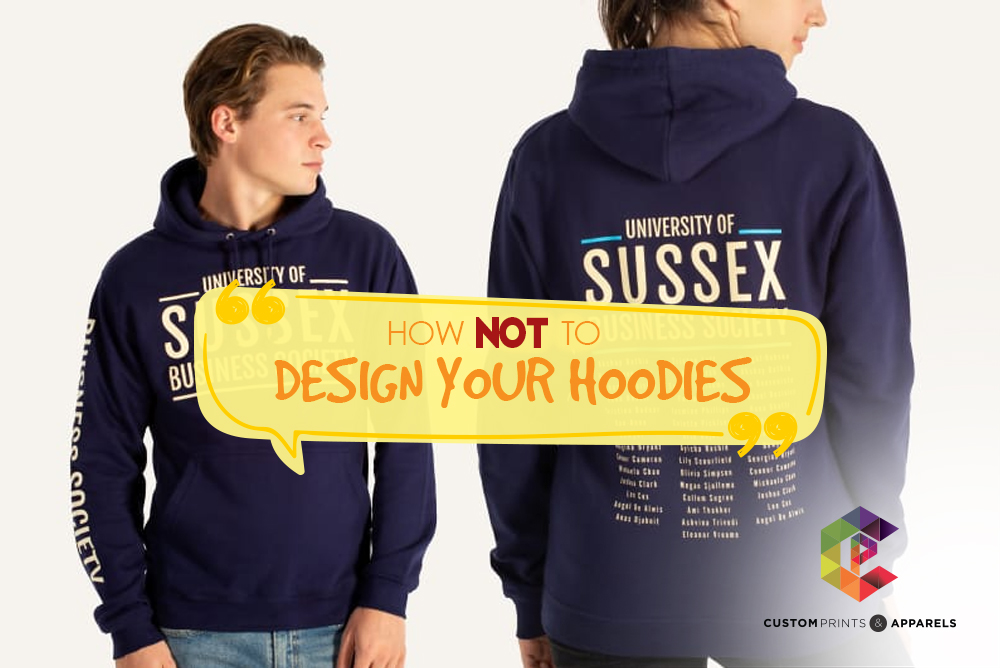 What do you think is the signature clothing item of the youth? Whatever you are thinking of; snapback, those shoes with an incredibly thick sole and boxy build, oversized t-shirts, etc., a hoodie is undoubtedly one item that would eventually cross your mind. As a matter of fact, a research showed that the public thinks you will reach an age where you are deemed to be too old to be donning hoodies outside (spoiler: it’s after the age of 26). We, for one, do not fully agree with what the result implies but putting those aside, people generally agree that it is a clothing item that symbolises youthfulness.

Thus, you may want to put the youth aspect into consideration when designing your own hoodie so it will appeal to the members of your group. It’s always good to know what to do when you begin designing something, but to know what NOT to do, too? Now that is what’s going to really help.

Before we get right into it, remember that there is no wrong when it comes to fashion. People have been making all sorts of fashion statements that we may take a dim view of, but if it works for them, it works! That said, we’re not saying your hoodies will definitely be frowned upon if you do any of these, but if you are wondering how you could make your hoodies look better, you might just find your answer(s) here!

When designing a hoodie, try NOT to have:

Hoodies are generally drapey so you do not want the surface to look even more crowded. Hence, going for a full-surface printing is out of the question. This is the kind of graphics you would find on motorbike jersey. If you haven’t noticed, that design looks good on that particular apparel because the jersey is body-fitting. The fitting of hoodies, on the other hand, is the opposite of that. A hoodie’s design should ‘lie low’ since the hoodies itself is loud, if you know what we mean. This apparel, albeit casual and plain, is normally the centrepiece of one’s whole attire. Even the components like the hood and muff are enough to complete the whole item, which is why you’d often see blank hoodies with perhaps one tiny logo on the chest. Keep the images and text on the hoodies minimal so the hoodies itself can still remain the highlight.

We get it, the bigger the image is, the more people will look at it. That’s not an entirely wrong notion, really. You would definitely catch a lot of attention if you have a humongous design placed in the middle of your shirt. But at what cost? A poorly designed attire will only make people take one look at it and think to themselves, ‘geez, I’m lucky I’m not wearing that’. Again, hoodies mostly look complete and sleek on its own. You can certainly add a bit of design here and there, but trying to overshadow the apparel with graphics is not always a smart move, we’d say.

Since hoodies are made to be loose-fitting, you do not want your upper body to appear short or fat (unless that is your purpose, of course). If that is not your goal, stay away from stripes, period. Even vertical lines would not look good on hoodies since the hoodies will not look consistent from the top to the bottom end of the hoodies. Still want to include stripes or lines somewhere? Keep them small and bordered so they appear like a part of the graphic design, rather than a part of the background or fabric.

We all want our design to stand out as much as possible, but throwing in as many colours as you want is not the way to go about it. Remember, just because you can, doesn’t mean you should. Inserting various unmatching or unbalanced colours may help catch attention, but not for the purpose that you hope for. In fact, this can make the design to appear scattered or messy. Pick just a few that you think is the best colours that match each other and work with them to make the design stand out without being an eyesore.

We’re sure you have seen a lot of tops with a single image or picture that is bordered with a square or rectangle, very much like a frame or simply an image directly pasted onto them. This particular design is attractive on many apparels, but you may want to think twice before putting it around your design. Due to the drapey texture of a hoodie, boxy designs tend to not harmonise well with the folds and creases. Here are several things you should consider. One, does your design even need a border? Perhaps it’ll look nicer without one? Number two, is there a chance that your design would look better with a less restricted border? If you must put a border, try to stick with a circle or one that outlines your design. Using your preferred editing software, make several designs so you can compare them side by side.

This is pretty basic and should be practised with any top during the designing stage. Do not make the mistake of placing the design way at the bottom, near to where your belly button is. As hoodies are sometimes purposely worn to look ‘oversized’, placing the design way too low can make it seem droopy and will not look visually appealing. Hoodies also usually come with muffs so you should make sure there is a proper, well-distanced gap between the muff and the design. It’s always better to have the design closer to the hood than to the muff.

So, what do you think? Isn’t designing hoodies much simpler than you’d expect it to be? As you may have noticed, we have been discussing things that you may want to avoid instead of what you should do throughout this article. That’s pretty much hoodie designing for you. It is all about learning the mistakes and avoiding them. Now that you’ve known better, we wish you the best in creating your masterpiece! Whenever in doubt, refer to this article. At Custom Prints & Apparels, we offer free design review for so you can see for yourself how your design will look on your apparel. Talk to us so we can help and guide you to create a custom hoodie Singapore people will be amazed by!