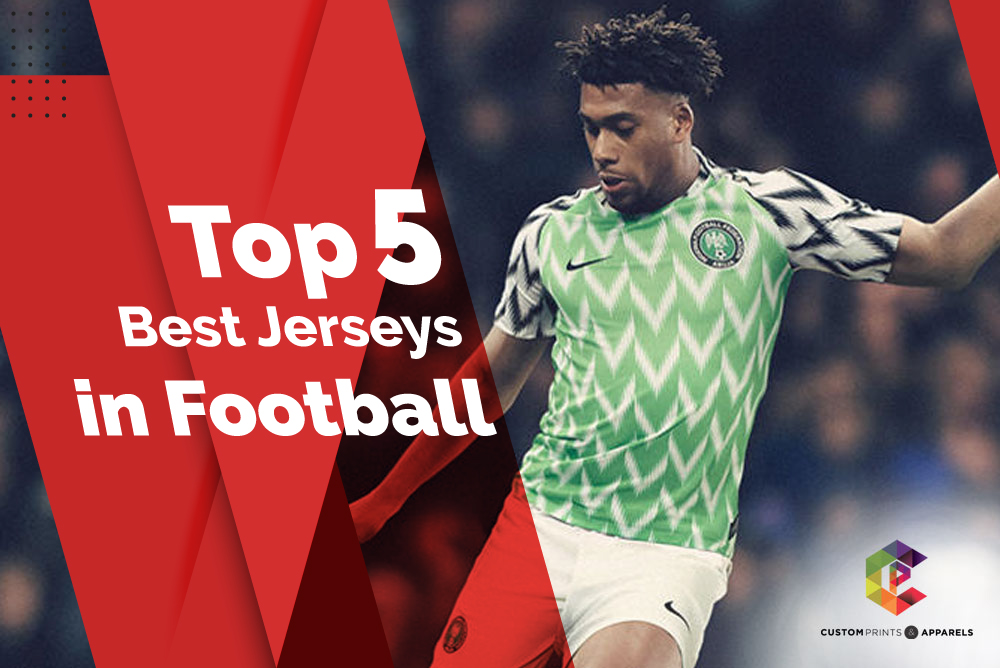 Disclaimer: The ones listed are our own opinions, and we’re sure you guys have your own favourites as well. Nevertheless, however tempting it may be, Manchester United and Liverpool jerseys will be absent from this list because being a die-hard fan of one of these 2 clubs, my judgement would most certainly be biased – so let’s avoid that path, shall we?

What usually sells out within minutes of being released? Concert tickets for A list artistes, iPhones, and anything Supreme. Come 2018, the Nigerian home kit for the 2018 World Cup joins the list of things that get sold out way too quickly. To be fair, it was expected. The kit, designed by Nike, was voted best jersey for the 2018 FIFA World Cup and very few can disagree. Drawing inspiration from their 1994 kit, Nike came up with a jersey that was absolute fire, gorgeous, and oozing with style. Sporting a fresh green, white, and black colours made even bolder with satisfying triangled pattern, Nigeria’s kit is a welcomed contrast to the usual traditional and somewhat plain kits of the national football teams elsewhere. The attention to finer details was not lost on Nike when they designed this shirt either. Instead of “Nigeria”, the word appearing on the shirt was “Naija”, referencing the popular wave of patriotism that is sweeping the nation. No wonder they got sold out within 3 minutes of launching. The meteoric success of the Super Eagle’s 2018 kit is a reminder to the major footballing nations: stay relevant and innovate, if you want to appeal to the youth.

Football was born far from Brazil, but it certainly was the Brazilians who perfected it. With a whopping 5 FIFA World Cup titles under their belt and having produced top tier talents such as Pélé, Romario, Rivaldo, Ronaldinho, Ronaldo Luís Nazário de Lima, Roberto Carlos, and Neymar (Yes, I SAID IT), Brazil is undoubtedly the greatest nation when it comes to the beautiful game. While their performances in recent years have not reached the level that we are all used to seeing in Brazil, the home kit from the 2002 World Cup, which, coincidentally, was the last World Cup that they have won, for now. Featuring a retro design with the mainstay yellow and green of the Brazilian team, Nike played it safe and kept the kit familiar. Proudly wearing the colours of their national flag, Brazilian legend Ronaldo (with an equally legendary haircut) went all the way in Korea and Japan, scoring both goals in a 2-0 humbling of Germany to lift the World Cup for a record fifth time.

Anyone who follows the Bundesliga surely knows of the famed atmosphere at the Signal Iduna Park, formerly known as the Westfalenstadion. Their crown jewel: the “Yellow Wall”, with its incredible noise levels that make jet engines sound like timid whispers, is formidable support to the already potent attacking prowess of the Dortmund team. It was rumoured that the Yellow Wall caused the ground to move, and it is only fitting that the Dortmund team has an equally devastating kit to wear to battles. Wearing a passionate and electric bright yellow kit with horizontal black stripes, their colours resemble that of a bee – and so does their sting. To all teams visiting Signal Iduna, beware, you will be assaulted relentlessly on both fronts.

Hailing from Japan, Urawa Red Diamonds may not have seen the most success in the world of club football that is dominated by European powerhouses. However, they can stand tall when it comes to their kit. Featuring a clean and satisfying triple diamond design on a red kit, the Urawa Reds are beyond impressive when it comes to aesthetically pleasing their fans. Seriously, whoever designed that jersey deserves the highest of praise. With black shorts and white socks completing the outfit, Urawa Reds are definitely winning all the style points.

Loud, innovative, and a total disregard for tradition. These are the traits commonly associated with Americans. One such manifestation of this American spirit was in the World Cup jersey at the 1994 World Cup, which they hosted. Taking inspiration from American icons: the Star-Spangled Banner and denim, the controversial but iconic kit was born – and boy did it shine! While they were eliminated by eventual champions Brazil, they did win over hearts (mine, at least) with their piece by Adidas carrying a fashion statement, specifically implying “I will not play by their rules”. Hideous or beautiful, masterpiece or monstrosity, you must admit, the originality was a breath of fresh air.

I bet you’re itching to step on the field and score some volleys after that trip down the memory lane. Why not do it with your colleagues and bond? Visit Custom Print & Apparels SG for custom jersey printing to get your own iconic jersey now!

What are the Best Custom Gifts For Corporate Employees?